Readers of this blog will know that the wife and I already have one cat, Miffy, a four-year-old female who is the light of our life. We now have half of a second cat, Kiki. 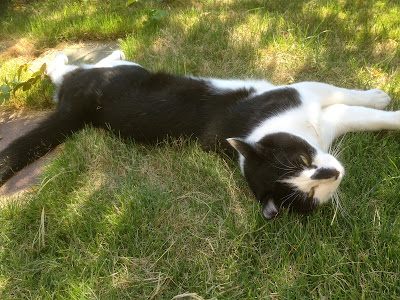 We first spotted Kiki back in July, hanging around with Miffy in the wild field next to our house. Miffy generally hates all other cats so for Miffy to accept another cat was pretty unusual. Since Miffy didn't mind him being around, I decdied to tame him. 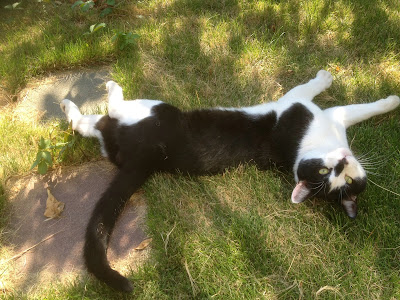 At first you couldn't get within ten feet of him. He would run whenever you tried to approach him, but like most stray cats he was keen for a bit of food. Over several weeks I fed him every day, gradually getting closer while he was eating. In order to get him used to being touched, I used a cloth glove and draped it over him while he was eating. Yeah, the first few times he ran, then he just started getting annoyed, swiping at it with his claws, but eventually he got used to it. Once I wasn't worried about getting ripped to shreds, I graduated to using my hand. Now, three months later, he's basically a big baby. He wants all the attention he can get, and will whine like hell for it. He's even begun to get a little fussy over his food, when at first he would eat anything.

He's still mostly an outdoor cat, because while some nights he sleeps inside he's still pretty skittish and seems to prefer being outside. I took him to the vet (what a nightmare that was, haha) and he got his vaccinations done. He also had a blood test and he's free of any diseases and also worms, which was good to know. In short, he's extremely healthy. I'm planning to get him neutered in the next couple of weeks, and hopefully after that we can teach him to use the cat flap. Miffy still isn't too happy when he's in the house (my house is tiny) so on the nights he comes in I keep them in separate rooms. He's completely docile though, oblivious to Miffy's hissing and snarling, although outside she's quite happy to treat him like a big brother.

When we first started feeding him he was really thin and his fur was a bit patchy. Now he's a big fat lump of cuteness.

His name, incidentally, came about because when we first started to feed him he would growl at us, and it sounded like kee-kee, so Kiki kind of stuck.

Email ThisBlogThis!Share to TwitterShare to FacebookShare to Pinterest
Labels: cats, how to tame a stray cat, kiki, taming a stray cat